A Short History of the Maldives 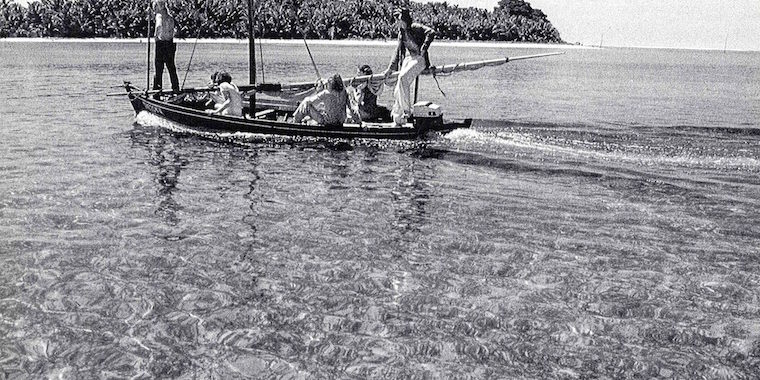 Buddhism spread to Maldives around the 3rd century BC and there are various archaeological remains of Buddhist Stupas and monasteries on as many as 59 islands. Today these remains often lay buried under the sand and hidden in dense vegetation.

The last Buddhist King of the Maldives was converted to Islam in 1153 and took up a Muslim name Muhammed Ibn Abdulla. The conversion was due in no small part to the influence and importance of Arab traders from the middle East and Africa. A Sunni Muslim visitor from North Africa called Yusuf Al Barbari is believed to be the man responsible for the conversion and his tomb stands in the oldest mosque in Maldives on the capital of Male, dating back to 1656. Al Barbari was a Hafiz, a person who could recite the Quran in its entirety. After the wider nation embraced Islam, (with some pockets of resistance supressed) the old Buddhist temples and idols were destroyed.

There is a more fanciful folk tale in which Al Barbari subdued the mythical sea demon Rannamaari that had been haunting the people of the Maldives since time began. Every month, a virgin had to be sacrificed for the demon, or the people were to face his wrath. A girl was chosen from the inhabitants by the king or his advisers and she would be kept alone on the first night of the month in an isolated temple at the eastern seafront in Male At dawn, the girl’s family would return to the temple to find only her dead body. Moroccan Muslim traveller Al Barabari suggested that he be sent to the temple in place of a girl to read verses of the Quran there. After he recited the Quran in the temple, the demon disappeared and was never heard of again. The Maldivian people were grateful that the demon had been banished and believed that it was the divine intervention of Allah and converted to Islam. The image of Islam banishing old pagan monsters and beliefs and paving the way for a brighter future is a powerful narrative in the creation of Maldives.

In the 16th century Mohamed Thakurufaanu, along with his brothers fought an eight-year-long war to drive out Portuguese invaders and remove their regent Puppet on Male who was trying to convert the Maldives to Christianity. Along with his 3 brothers he landed on a different island every night to drum up support on his way to Male. The Utheema brothers along with the Maldivian people overwhelmed the Portuguese Garrison and gained independence for the Maldives nation. The Northern Alif Atoll houses Utheema Ganduvaru which is his palace and he is regarded as a National hero.

After many years of Colonial activity & interference from the Portuguese and then the Dutch, the Maldives became a British protectorate in the 19th century which lasted until 1956. The British also held a military base in the Southern Atoll of Gan until 1976. Due to Gan’s strategic position and access to the Indian Ocean, it became part of the theatre of war during the second World War and was used by the British as a secret naval base. Towards the end of the war the Japanese torpedoed and sunk a British ship called the Loyalty and it remains underwater and is an excellent dive site.

Partly due to British influence, the Southern area of Maldives known as Addu developed quite separately from the northern parts like Male and to this day has its own distinct culture and dialect. There was even a brief Addu uprising in the 1970s where they tried to form a breakaway government with closer ties to the British. On resorts you will see that staff from Addu and indeed other regions of the Maldives are proud of their history and have a strong identity not unlike certain regional parts of the UK.

Despite the UN declaring it unsuitable for tourism in the 1960’s, the Maldives opened for tourism in 1972 with Kurumba being the first property to open followed by Bandos. Served by only 2 airstrips, 1 on Hulamale and 1 on Gan, The Maldives become renowned as a diving and snorkelers paradise due to its private islands being surrounded by coral reefs. Initially the resorts were simple with basic accommodation and catered towards Italian & German divers, snorkelers and fishing enthusiasts. It wasn’t until the late 80’s that the destination started to attract the lucrative Honeymooner market. The remote archipelago transitioned from a nation dependent on fishing to one powered by a flourishing tourism industry. With resorts like Soneva Fushi pioneering eco luxury travel in 1995 and Huvafen Fushi opening in 2004 and One and Only Reethi Rah opening in 2005 the Maldives quickly became renowned as the ultimate luxury travel getaway destination boasting some of the most expensive and exclusive resorts anywhere in the World.

The Maldives is a fledgling Democracy and has gone from being ruled over by a succession of Sultans to becoming a Republic. The gradual transition has seen plenty of ups and downs, with authoritarian strongmen and coups. Ibrahim Nasir was the President of the Second republic in 1968 and an influential figure in modernising the country, bringing about Maldivian independence and ending its protectorate status under the British Empire. He was succeeded in 1978 by President Gayoom who stood as the only candidate for election. The most famous coup came in 1988 when a group of Maldivians and armed Tamil mercenaries from Sri Lanka seized control of Male but were unable to capture then President Gayoom. The president called in for support from India and they duly responded by landing paratroopers who restored order to the capital and crushed the coup. During the later years of President Gayoom’s rule, the tying together of the Maldives state and Islam was often a useful tool to deflect criticism of governance. To criticise the Maldives government was to criticise Islam and visa-versa. This fuelled a late 1990s shift to Wahhabism which challenged the more traditional moderate Islamic practices of the Maldives. This was even further accentuated after the 2004 tsunami, when Saudi-funded preachers gained increased influence. Within a short period of a decade fundamentalist practices started to dominate the Maldives culture and It has become a more religiously conservative country. At the Same time, there was also a demand for greater Democratic reform with growing pressure on the autocratic ruler Gayoom who had ruled for 30 years from 1978 to 2008. Bowing to public pressure, elections were called in 2008 and President Nasheed ushered in a short-lived new era as a democratically elected leader in which greater focus was given to the Maldives fragile ecosystem with the famous underwater cabinet meeting and healthcare for all citizens was introduced before he was ousted in 2012 on charges of illegally arresting a judge. President Yameen succeeded him as the next democratically elected leader in an election that was highly contested due to voting irregularities. Yameen being the half-brother of previous ruler Gayoom, brought with him a similar autocratic style of rule and closer ties with China while breaking away from the commonwealth with Britain. The period of his rule saw a huge increase in resorts being built and infrastructure put in place such as the Sinamale bridge or China/Maldives friendship bridge which connected Male with the airport. It also saw the beginning of the airport redevelopment and extension of the local island Hulamale phase 2. Yameen was eventually replaced by the Maldives 3rd democratically elected leader Ibrahim Solih in 2018 and the country has been enjoying a slightly calmer political landscape ever since.  The Maldives has also re-joined the commonwealth although China remains its most important partner.